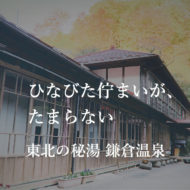 I climbed up and down and ran through the mountains with cars. On the way, when I passed through a small village and passed through a narrow road in a forest where only one car could pass through, parking spaces where 5 to 6 cars could be parked and signs of “Kamakura Onsen” could be seen。 50 minutes to drive a car from Sendai, I finally arrived at my destination.

Clear blue sky of autumnal weather, mountains colored red and yellow, mountain lodge in which the red roof which is buried so as to be buried in the valley is impressive. There was a scene like a postcard. When I got off the slope from the side of the parking lot and the whole picture of Kamakura Onsen was revealed, unexpected admiring voice leaked out. 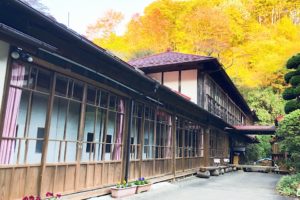 The room building which was built in the late Taisho era has been made long from the front of the premises to the back and the sliding doors of glass that are regularly lined with the inner edge extending to the other has a nostalgic retro sense There.

A white towel which seems to be a hot spring tower hanging under the eaves produced a nostalgy and the naked light bulb lighted in a bridge corridor connecting the hot spring building standing parallel to the guest room was the animation of Miyazaki Hayao, Atmosphere that seems to come out with sound effect … …. Besides, I was swimming to carp in a small pond beside a hot spring building. No matter where you cut it, there is a tasteful atmosphere that is likely to appear as a scene of the movie as it is. Hinabita hot spring degree, 100% hot spring inn, it was Kamakura Onsen. 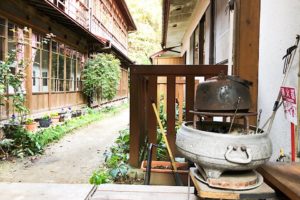 I hurriedly taken out the iPhone in the bag.

“I want to convey this unbearably sunny atmosphere by picture”

From here, I try to put it in the camera with various compositions from here. With my mother who was absorbed in the shooting pretty hard to reach the entrance of the ryokan, the two children entered the hall quickly. The secret of the legend discovered by the goddess’s announcement Kamakura in the Zao town of Miyagi after asking Kamakura Onsen? And its name was strange. For me who is from Kanagawa, speaking of Kamakura, the impression of Shonan Kamakura is intense.

Actually, the name of Kamakura Onsen is derived from a certain legend related to the goddess.

During the Heian period, there was a battle between the Imperial Army and the Rebel Army in the area near the present Kamakura Onsen (then Zao Cho Pyeongtaek). At this time, the scandal of Kamakura Kagemasa of the Imperial Court is injured by shooting the right eye with an arrow. One night the battle was over after the battle was being treated in the village of the land, the scenic administration received a dream from the goddess of Hashiyama (Debasanzan) in a dream.

”I am the Haneyama’s God’s , but I want to cure your wounds with thick faith, I want to cure their wounds, because there is hot spring upstream of this pond, please do a quiet spa.”
Source：Kamakura onsen HP

Then, in fact, there is a lily that lukewarm water springs upstream, and when Kagemasa played the ground there, he said that the wound had recovered to the contrary. Since then, this lukewarm water came out to be called Kamakurazawa, taking the last name of the scenic spot, and it has reached the present.

“Certainly, there is no such legend.”

Because it is a spa inn which is operated as a hideout at the foot of Zao mountain, we could accept this legend completely without discomfort. For the legend that can be said to Kamakura hot springs, details are posted on the sales shelves of the lobby, so if you are interested, please check them.

By the way, it was around 150 years ago when Kamakura Onsen started to run as a Yuji lodging house, and it is said to be the ninth generation now.

The spring quality of Kamakura onsen is a hypotonic alkaline cold spa, a so-called simple fountain known as hot spring of beautiful skin. It is said that it has been popular as a hot spring resort for skin diseases since long ago.

The hot water is colorless and transparent and it is crispy, but gradually the skin becomes slippery when used. It is warming because it is a cold spa, but it burns firewood and warms it. It would be a warming system unique to a small one inn. The hot water temperature is slightly hot, but if it is too hot you can add water and adjust the temperature.

The dressing room is changing as small as five people are changing clothes, it seems to be cramped.

The bathroom of tile making is likewise made in a small way, and if five people are going to extend their feet, it will be full. There is a window full of one side of the bathtub, the wind from the mountain entering through the window is very pleasant. It was a bathroom filled with spirit.

Sales are in units of 20 liters, 500 yen when bringing in containers, 1600 yen with containers. 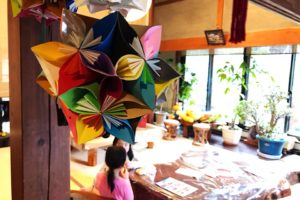 This time, since I visited nearby in the evening, I only used a day-trip bathing, but I also want to try using a private room where I can go to the room building at one time.

Normally, private rooms in day-trip hot springs are limited in time to 1 hour or even 3 hours at most, but private rooms use of Kamakura Onsen is available from 8 o’clock to 17 o’clock business hours, as much as you like You can do.

Besides, the price is 1080 yen for adults and it is quite reasonable.As I can enjoy walking around Kamakura Onsen, I will enjoy the hot springs while enjoying the foot of Zao mountains slowly from the morning next time.

Since when is the snow in Zao-cho?

Kamakura Onsen is the secret hot spring at the foot of Zao mountain. Of course, I am worried about the winter snow. As I confirmed to the inn, it seems that snow is not so concerned, as it is not at the top of the mountain but at the foot. It is said that it is around January to accumulate. Imagine a beautiful snow scenic Kamakura hot spring as well.

I will change to winter tires and want to visit again during the snow.

Akiu onsen in Sendai, even a valuable night, put in one day hot spring｜hotel kiyomizu 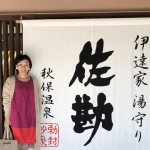 Akiu onsen in Sendai, even a valuable night, put i…